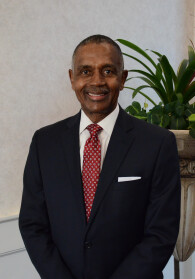 Dr. Charles B. Jackson, Sr., a native of West Columbia, South Carolina, attended the public schools of Lexington County School District#2, the former Lakeview Elementary School, and Brookland Cayce High School, where he graduated in 1970 with honors. He continued his academic career at Benedict College in Columbia, South Carolina, where he graduated Magna Cum Laude in 1974 with a Bachelor of Science Degree in Mathematics. While at Benedict, he received the Distinguished Mathematics and Physics Award for the highest academic average in those respective areas. After graduating from Benedict, he pursued seminary studies at the Morehouse School of Religion of the Interdenominational Theological Center in Atlanta, Georgia, and in 1977 he graduated with honors receiving his Master of Divinity Degree (M. Div.). He was presented the Distinguished Board of Directors Award from the Morehouse School of Religion for High Academic Achievement. In August 1978, he completed one year of certification of residency in Clinical Pastoral Education at the South Carolina Academy for Pastoral Education. On May 12, 1985, Morris College in Sumter, South Carolina conferred upon him the Honorary Doctor of Divinity Degree. On May 12, 2007, Benedict College conferred upon him an Honorary Doctor of Divinity degree.  December 14, 2018, he received a Doctor of Divinity from Columbia International University and on December 17, 2018, he received a Doctor of Public Service from the University of South Carolina.

Dr. Jackson acknowledged the call and began preaching at the age of nine (9); was licensed at age ten (10); ordained at twelve (12); and at eighteen (18) was installed as Pastor of his home church, Brookland Baptist Church in West Columbia, South Carolina, where he has humbly served for fifty (50) years. The church has over sixty ministries, a full service Federal Credit Union, the Brookland Foundation, the Brookland Center for Community Economic Change, the Brookland-West Columbia Community Housing Development Corporation, and the Brookland Community Pediatric Center which is a collaborative effort with the Eau Claire Cooperative.

In May 1999, Dr. Jackson led Brookland into a new sanctuary that seats 2,300 and in September 2005, led the completion of a 68,000 square foot Community Resource Center consisting of an Academy Child Development Center, a Health and Wellness Center and a Banquet and Conference Center. On March 28, 2008 the Lexington District II School Board awarded Brookland the former Lakeview/Northside School that Dr. Jackson attended for 10 years and now converted to the Brookland-Lakeview Empowerment Center. On December 11, 2020, The legacy of the former Lakeview School — a community cornerstone now affixed between North, Batchelor and Senn Streets — was sealed in South Carolina’s archives as the first historically segregated African American school to receive a state marker in Lexington County.

On October 5, 2008 Brookland became one church in two locations, adding a Brookland Baptist Church Northeast location. Reverend Dr. Christopher Leevy Johnson is the Northeast Campus Pastor. On November 1, 2020 Brookland completed the construction of a 35,800 square feet Christian Learning Center which includes a 18,000 square feet Youth and Teen Center. Dr. Jackson has a partnership in ministry with the Providence Baptist Church, Dr. Samuel Reeves, Pastor, and a weekly radio broadcast in Liberia, West Africa. As a result of the Church’s Economic Empowerment Initiative, over 190 persons are employed in Brookland’s ministry. Dr. Jackson has trained and mentored 18 sons and 1 daughter who currently pastor in the Midlands of South Carolina. A total of 77 ministers have sat under his leadership during the 50 years of his pastorate.

Dr. Jackson has held and still holds membership in a number of denominational, civic and community organizations. A few of them include former president of the South Carolina Baptist Congress of Christian Education and the Gethsemane Baptist Congress of Christian Education, Past Moderator of the Gethsemane Baptist Association, Kappa Alpha Psi Fraternity, Inc., Golden Square Lodge #283, NAACP, 100 Black Men of Greater Columbia, and the Cayce-West Columbia Rotary Club. He serves or has served on the Boards of the Capital City Club, Fellowship of Christian Athletes, Morehouse School of Religion, Lexington Medical Center Foundation, Lexington County Health Services District and Board of Visitors for the University of South Carolina. He is the immediate past Chairman of the Board of Trustees for Morris College in Sumter, SC. In 2011, he was inducted into the National Black College Alumni Hall of Fame.

He holds numerous local and national awards, has preached throughout the United States and has delivered lectures at more than twenty (20) colleges and universities. On March 31, 2011 he gave the opening prayer as guest chaplain for the U. S. House of Representatives. In 2001, Governor Jim Hodges awarded him the Order of the Palmetto, the highest honor that the State of South Carolina confers upon its citizens.  In January 2018, he was awarded the Jefferson Award from WACH Fox 57 for his philanthropic service to the community. 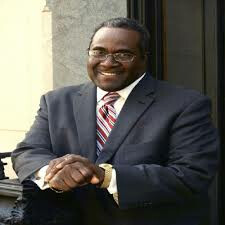 Reverend James A. Jamison, is a native of Cayce, South Carolina. He attended the public schools of Lexington School District #2.  He is a graduate of Brookland-Cayce High School.  Prior to his graduation Reverend Jamison received and accepted the call to the gospel ministry.

He pursued seminary studies at Morehouse School of Religion of the Interdenominational Theological Center in Atlanta, Georgia and received a Master of Divinity Degree (M.Div.) in 1990; in May of 2014, Reverend Jamison earned a Master of Sacred Theology from the Lutheran Theological Southern Seminary in Columbia, South Carolina.  Reverend Jamison completed one certified year of residency in Clinical Pastoral Education at the Columbia Area Academy in 1991. Reverend Jamison received his Doctor of Ministry Degree at Garrett Evangelical Theological Seminary in Evanston Illinois, May 2019 where he was awarded the Styberg Preaching award for the best Dissertation.

Reverend Jamison has preached and taught abroad.  In 1989 he was invited to do research in African and Europe in the following countries; Rome, Egypt, Sudan, Ethiopia, and Kenya.  In June of 1994, he participated in the Kenya Partnership as preacher, teacher and group leader.  In 2007 Reverend Jamison traveled to Liberia, West Africa on a preaching and mission trip.  He is also in demand as a lecturer, and teacher on the State and District level.  He is a member of the faculty of the State Congress of Christian Education and recently served as the director of the minister’s division. Reverend Jamison has served the Gethsemane Congress of Christian Education in several capacities: instructor, dean, and president as well as the former Commissioner of Education with the Gethsemane Congress of Christian Education.  He has also served as Dean of the Gold Hill Association in Forest City, North Carolina, and as an instructor for the Southern Region of the Progressive National Baptist Convention.

In addition to being a graduate of Benedict College, he has had the distinguished honor of serving as a former instructor of religion. He now serves as an instructor of religion at Morris College where he was selected for “Who’s Who among America’s Teachers” 2003-2004. He has also taught at Claflin University. He now serves as a peer group facilitator for the Styberg Preaching Institute. 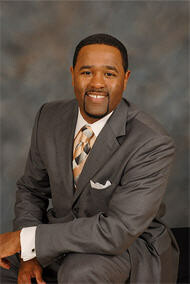 Reverend Jackson continued his education at the Morehouse School of Religion on the campus of the ITC in Atlanta, Georgia, where he maintained Dean’s List status with a 3.5 GPA.  He was selected by the staff and students to give the sermon during the annual ITC Conference on Ministry on February 20, 2003.  Reverend Jackson is a Fall 2002 inductee into the Theta Phi National Honor Society for Seminary Students.  He graduated with Honors on May 10, 2003, and earned the Master of Divinity degree with a concentration in Homiletics.  He was presented the Memphis Award for academic excellence and nominated as one of the nation’s Top 40 Seminarians to appear in the prestigious The African American Pulpit magazine. He currently serves the United Way of the Midlands as a member of its Board of Directors.  Reverend Jackson is also clinically certified by Palmetto Health, having completed an extensive unit of Clinical Pastoral Education.

Reverend Jackson received his license to preach the Gospel on September 23, 2001, at the age of 21, and was officially ordained into the ministry on August 14, 2002.  He is presently the happy and humble pastor of the New Laurel Street Missionary Baptist Church, Fairfield Road, Columbia, South Carolina.  He is the Assistant Dean of the Gethsemane Baptist Congress of Christian Education, as well as Vice Chairman of the South Carolina Baptist Fellowship of the Progressive National Baptist Convention.

However, above all of his accolades and accomplishments, he believes that fulfilling God’s Will is primary, everything else is secondary.  Reverend Jackson loves God, loves the people of God, and loves preaching God’s Word.  He lives day-to-day testifying that “God’s Grace is sufficient and His Mercy is everlasting!”  His favorite passage of scripture and firm conviction is Romans 8:28, “And we know that all things work together for good to them that love God, to them that are called according to His purpose!” 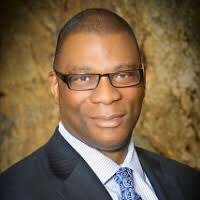 Rev. Salmond is a native of Columbia and is a graduate of the Virginia Military Institute in Lexington, Virginia. He received his Masters of Arts degree in Bible Exposition from the Columbia International University Seminary and School of Missions.

Although he had a successful career as a Wealth Advisor at a major investment company, he answered God’s call to preach and was licensed In 2008 by Rev. Charles Jackson, Sr. Rev. Salmond is the primary worship leader at the 8:15 Sunday worship services and he is a co-teacher in the Brookland Young Adult Bible Study Class. Additionally, he exercises his gift of teaching and preaching whenever he is called on.

Reverend Jeryl Salmond is currently the visiting pastor of the Ladson Presbyterian Church where he has been leading the congregation since August 2010.